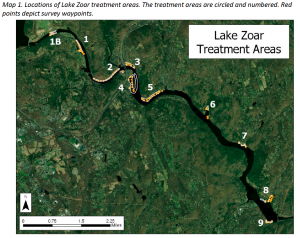 Eurasian milfoil, Brittle naiad, and Curly-leaf pondweed were the only invasive species found in Lake Zoar in 2020.

Brittle naiad was not found in the lake in June and was very sparse in October.

Curly-leaf pondweed was fairly abundant in June but had decreased notably by August and was very sparse in October.

14 native aquatic plant species were found in Lake Zoar in 2020, along with filamentous algae and Lyngbya, which is a mat-forming cyanobacteria.